Found out transfers this week! Looks like my "travel elder" days are behind me! It's kind of a relief but at the same time kind of sad. I'm really going to miss the area we had. Elda LaMont, Child and I all had some pretty good memories. Some to be discussed after the mish haha. Now Ill be going to a new area and ward called Blacksands! I've heard that this ward is the most missionary minded in the mission so I'm really looking forward to working with lots of members!

As for the week its been solid. Pday was Pday.

Tuesday the highlight was seeing Glen and his family again. The lesson got super serious again and I kinda felt like we were chastising the family a little but they all seemed up to the challenge! This Sunday a few of the older boys all came to church too! My last Sunday in the Etas ward but we had a decent turnout with investigators!!!

Wednesday we went out to a village next to the ocean and taught this Presbyterian lady named Sarah. Turns out she is super interested in learning about other religions but is solidly founded in hers. I wish I could keep teaching her but looks like I wont have that chance :(

Thursday I did an exchange in Blacksands with my previous companion Elder LaMont! Its was actually super legit! We taught a balanced mix of investigators, less actives and members and had a pretty cool miracle. One papa of a family that are almost all members finally softened his hard and is taking missionary lessons! He started following the commandments and is open to the missionary lessons. Elder LaMont said that he wouldn't even take a pamphlet before and now he basically wants to get baptized. It was a nice little sneak peak into the area that I am now in!!

Friday the highlight was definitely a baptismal interview for this girl named Margret from Fiji! She speaks perfect English so we did the interview in English which was the first time on my mission doing one in English. It was super awkward at first. I kept throwing in Bislama words and couldn't get my point across haha. For some reason talking to strangers in English is just as hard as it was before the mission. Funny how that works. Anyway I found out that Margret's mother is from a village really really close to the village that I worked in for 3 weeks in Fiji! It was awesome to get to talk about Fiji again! She is just a super cool convert.

Saturday was just a day full of lessons :). Nothing too out of the ordinary. We are really pushing the members to get them to take our investigators to church and it seems to be working! Like I said before we had about 4 investigators come to church finally. Twas a relief.

That's about it for this week!
Love,
Elder Burbank

-Farewell to the Mahit family
-Elder Hardy
-There is something about kids and climbing in the islands haha. They can just fly up trees and ropes.
-Farewell to Grem and his family 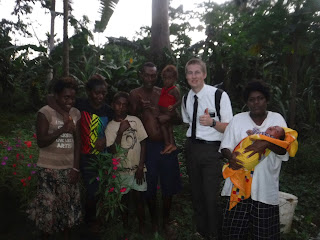 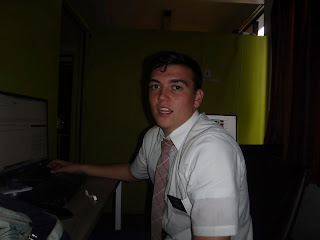 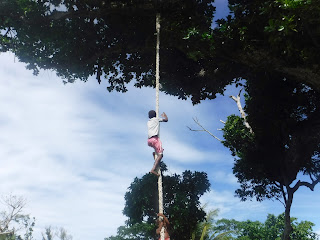 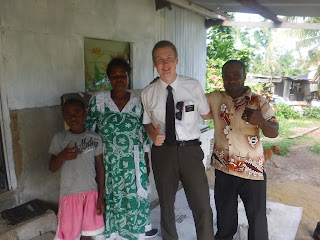