Another solid zone conference this week. The Elders from up north in Bourail, Elder Graf (MTC comp) and Elder Mariteragi came down and stayed with us in Dumbea for the conference. A nice little reunion with the old MTC comp haha. At the conference we got to play lots of games and what not such as: a huge version of kerplunk, darts, this crazy tag game where we had balloons tied to our ankles. Just a bunch of chaos.

Friday we were back to work! We went to go see Ludo and he was in the middle of gathering firewood so we dropped everything and helped him out. We had to cross a river and start snapping tons of branches. I think the people driving by thought we were crazy working like that in our Church clothes. Re-crossing the river holding all the wood was a little hard. Elder Tetuaiterai slipped a little and got his feet wet haha. He went the rest of the day without shoes.

Saturday was pretty ordinary. Lots of contacting. Lots of rejection. Found a few new potential investigators. We also had a lesson with this one Jehovah's witness family. It was basically an exchange of brochures and a friendly conversation. Normally Jehovah's witness don't let us talk to them so it was a good experience. The father of the family wants us to come back and help him build an addition to his house so that's a good sign I guess haha. We also met this kid named Meddy. Turns out it was his 18th birthday. He was actually super chill. He has already read the whole Bible and we gave him a Book of Mormon as his birthday present haha.

Sunday we fasted. There were two English speaking couples visiting too! One from Idaho and another from New Zealand. I had to help with translation which was actually pretty hard. First time I've really actually tried to translate.

Monday we did our exchange with the ZL's. Elder Rhodes came down to Dumbea with me. Solid day with some solid lessons. Nice to see an experienced missionary work for once haha. He goes home in 3 months. He told me were going flying down in Cedar City when I get home so I'm already looking forward to that!

Tuesday was district meeting like normal. This time it was a little out of the ordinary though. When the sister pulled up in their car a cat literally came out of no-where. We think it was hidden up in the chassis of their car. Anyways it followed us all into the chapel and wouldn't leave us alone. We locked it outside but then it found a way to get in through the window. We kinda just accepted the fact that we weren't getting rid of the cat so it casually just walked around the table during district meeting lol. After district meeting the day wasn't too productive but we did help our landlord fix his weed wacker haha. Anyways that's it for this week!

I didn't really have my camera with me when we did stuff this week so I don't have any pictures! Next week I'll send a bunch of my companions pictures. Also transfers are this Monday! We'll see what happens.

Bonjour tout le monde! Another good week here in Kanaky. Last Pday we played a round of bowling with the district. For most of the Tahitians it was there first time playing so it was pretty funny. Elder Rhodes and I were neck and neck the whole time and I blew it all at the end with a gutter ball. Had to take second place :(

Thursday we did lots of studies. I just finished Jesus the Christ. Solid read if you can bear all 790 pages haha. We also got out and contacted some kids our age. Turns out my comp is a low key DJ in Tahiti and some kids here listen to some of his music haha. Its and easy way to contact when we hear his music. We also found out that one of the recent converts from Kone which is way up north move in next to us at the Kava bar haha. Its her extended family that runs the bar.

Friday we found out transfers! Ill be staying here in Dumbea with Elder Tetuaiterai. I'll be finishing his training. The district got changed around a bit though. Picture of the new district below. We also helped our land lord finally fix his weed wacker haha. We also went and contacted the farthest squat we could find in our area. Turns out they were super nice and we had a lesson with them! Friday night we had our ward family home evening at bishops house. The missionaries gave the lesson and it went super well. Not too many investigators came but it was good for the members!

Saturday we decided to follow up with a random lady named Fabianne who really wasn't that interested the first time we talked with her. This time round she told us she normally doesn't accept people like us to share a message but this time she said she would! We had a lesson with her whole family and after the lesson she wanted us to stay and eat with them! It was a miracle. They gave us a bunch of deer meat that we quickly ate the day later because it was soooo good.

Sunday I had to do some translating again in sacrament meeting! This time for a group of Australians! They told me when ever I find myself in Australia I can stay with them haha.

Tuesday our Muslim neighbor called us early in the morning because he wanted to give us a bunch of meat! Fish, pork, beef. Everything! He owns his own butchery. He said he wants us to meet and have lunch with them Sunday afternoons to take some lessons! Right before we headed in for the day too we ran into some kids playing soccer at a round about. We joined in and played with em for a little while. Pros clothes and all haha. It was pretty fun.


Sister Decady and Davis leaving the VPVM :( A bunch of Elders and sisters will be leaving in the next couple of transfers :( 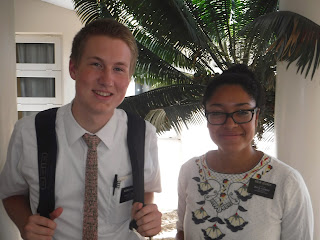 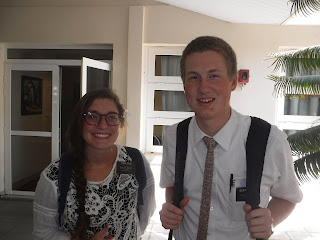 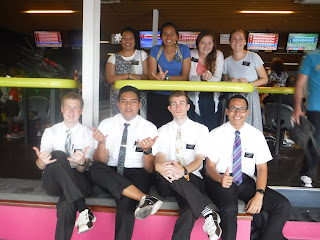 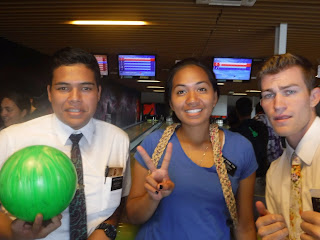 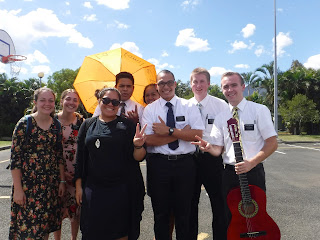