This week has been pretty solid. Last Wednesday we had a fun district activity and we played a bunch of board games and card games like Clue in French! I also got a haircut from one of my zone leaders! He's pretty new at cutting hair so it was an interesting experience haha. Really nice of him to take time out of his P-day though! I usually just get haircuts from other Elders now because professional haircuts are really expensive and I'm not sure how I would explain how I want my hair cut in French when I can't even do that in English haha.

Thursday we had a lesson with one of our newer investigators named Evelyn. We actually found out that she is an active Jehovah's Witness which kinda caught us off guard. She is still really open to us and says she wants to come to church which is a little bizarre. We were kind of surprised she let us in in the first place! We also had this lesson with a long time investigator who is originally from Tahiti named Raimanu. He is super chill and I think he and his girlfriend want to get baptized but they live together...and I don't think they are getting married anytime soon unfortunately. Maybe one day.

Friday we had our sports activity again with our English class too. We had a whole non member family come to the English class and they loved it! We haven't even taught this family once, we just met them and invited them while tracking but they still came! They are moving up north really soon unfortunately but I think they have huge potential!

Saturday we contacted this member referral which went super well. The member who told us to contact her told us not to mention her name...but we did anyways. We really felt like it would make a difference and it did! She seemed super interested and they even asked for 3 copies of the Book of Mormon in Bislama! (They are from Vanuatu).

Sunday we went to go teach the family that came to the english class but the dad wasn't there so they said another time. Instead of us teaching them though they gave us a bunch of different kinda of cake instead haha. It was super good :) We also found out that a long time investigator wants to finally get baptized! I haven't even had a lesson with her yet because she has had the lessons so many times so the missionaries kinda just let her on her own for a while. She occasionally comes to church but out of the blue she said she wants to get baptized in April !

Monday was ALOT of contacting. We didn't get a single lesson but we still had good success. We found a bunch of new potentials which is really promising! Also the weather on Monday was super weird. It was raining with mostly blue skies and sunshine. It didn't make any sense.

That's about it for this week!

Another view of our apartment. 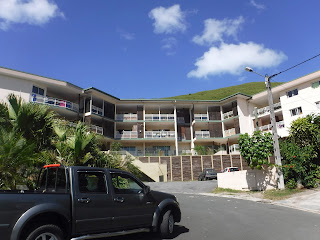 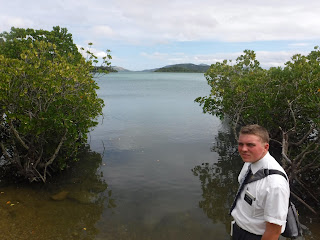 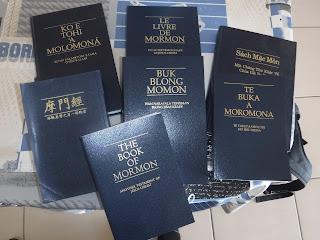 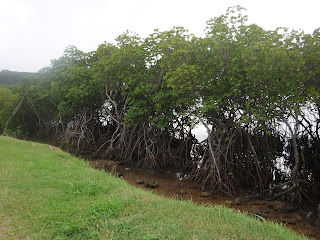 Well its Dengue season here in New Cal. Every other day its pouring down rain then its clear skies and waaay too hot which is apparently good for mosquitos. There are these posters that the government put up everywhere (in the pics below) so people are rightly taking precaution. Besides the dengue literally floating in the air this week been good! Last P-day I spent most of my time on a split with one of the zone leaders, Elder Miner, because he was pretty sick. I had to stay behind in the zone leaders apartment while Elder Conger and the other zone leader Elder Kessler went to ward meetings. We all thought Elder Miner had the dengue but it turns out it wasn't so that was a relief.

Last Thursday we had a nice lunch with some recent converts in the ward, Famille Wajoka, which was great! A lot of our lessons that day actually fell through though. That night we tried to have a "Visit de Bon Berger" which translates literally into "visit of good Shepard" which is a ward activity where we all go out to visit less actives but it kinda fell apart unfortunately. It can be hard to actually get things to follow through here because the church is still so young!

Friday we had a great lesson with one of our investigators, Heirani. She wants to get baptized on the 16th of April which is after the transfer so we'll see if I get to be here for that! We also had a pack of 5 dogs follow us all the way back to our apartment door!!! It was kinda ridiculous. That night we had dinner with the Famille Ulivaka again and they told us their conversion story which was super cool. At first they really did not like the missionaries because apparently they ruined the sister Ulivakas birthday by dropping in and bothering them. Later that day however those 2 Elders came back that same day with a random cake that someone gave them for no reason in particular haha.

Saturday we went contacting in a pretty far place in our area. This place was basically just a gigantic cricket field with a few houses beside it. I didn't get a picture unfortunately but if we ever go there again I will. While we were there there was a bunch of old ladies in uniformed "mommy dresses" playing cricket. It was pretty funny to watch haha.

Monday we had our apartment checked by the new senior couple in our mission, Elder and Sister Jean from Tahiti. We passed :). Other than that though we basically just added to our tan lines by walking A TON. We tried to have some lessons but nothin really worked out. However, we did get to give a Book of Mormon in Fijian to this old Fijian guy oddly enough.

Thats about all for this week! 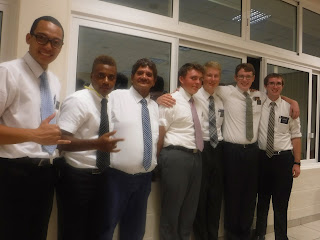 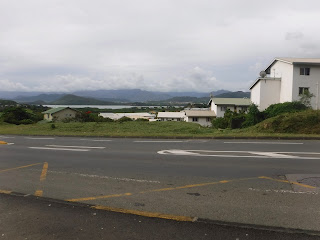 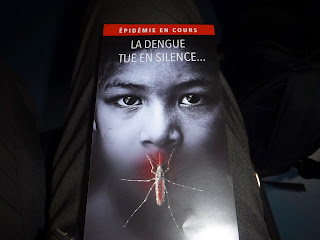 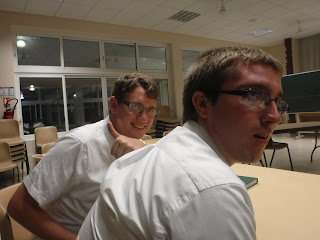 These last two weeks have been a little crazy! Thursday a few weeks back I got to go on an exchange with one of our zone leaders Elder Ursenbach which was awesome! It was really cool to see the perspective from someone who has been in this mission for much longer than I. We also found out all the transfer info and I'll be staying in Ducos with Elder Conger! I was kinda relieved when I found out I was staying here. There is still work to be done!

Last Saturday was a pretty normal day. We did get stuck at this one ladies door though for like 50 minutes. She talked about anything and everything without even talking a breath....literally. Some French people talk while there are breathing in so it's never ending haha. We tried to leave multiple times but she just kept talking and talking!

Last Monday was the first day of the new transfer! We got two new zone leaders in our district. Elder Minor and Elder Kessler. They are both pretty cool! We also ran into a guy named Jean from Australia but lives in New Cal. Apparently he loves to take any opportunity to speak English so we have a 45 minute discussion in English which was suuuuper weird. He kept going on and on about how he loves what we do as missionaries but he also kept saying he'd be a terrible Mormon haha. He also said we didn't quite measure up to how good German Amish people were. It was pretty hilarious. He was super cool though. Later in the day we went contacting in the neighborhood that we live in. After an hour or so of not really getting to contact anyone we ran into this guy named Luigi. He started out yelling at us in Italian but then realized we didn't actually speak Italian....In a French speaking country haha. He switched to French and talked to us for some 40 minutes about how youth now a days don't do anything and he really liked how we were "workers" and "doers" essentially. His Italian accent on his French was super weird too. I couldn't understand anything for the first 5 to 10 minutes and neither could Elder Conger. Turns out he was super catholic and he was flying back to Italy that night! We are hoping he meets up with some missionaries in Italy haha. That Monday night we had a dinner with a really funny Tahitian family who is partially active, Inactive and non member. The mom is the only active member and she did NOT hesitate to point out her family members about being inactive in front of us haha. They were all super cool though.

It also turns out that one of our less actives that we visit passed away this week. She was quite old and was too sick to go to church. It still really caught us off guard though. It was kinda interesting though because apparently she passed the morning after she had received the sacrament for the first time in a LONG time.

This most recent Friday we got to go to the wards sports activity which was much much needed for me. First time I've really played basketball in 3 months!!!

Yesterday Elder Conger assigned me to give the district training for our district meeting! I still don't know how I feel about giving all these missionary trainings in French but I'm sure its helping me one way or another haha. We also ran into these 2 younger girls on the street who turned out to be Jehovahs Witness missionaries. They were super nice and from some reason they wanted to share something with us. They also gave a strange pamphlet about dealing with depression which I didn't really know how to take haha. All in all a strange but good couple of weeks!

Sorry I didn't really take any pictures this week!!! Ill try to get some next week.
Posted by WDB at 10:45 PM No comments: