This week has been really fun! Last P-day we had a zone BBQ for our departing missionaries. Sister Parker the Polynesian sister in our zone did most of the cooking and it was super good! We also had another solid dunk ball game but Elder Lyons twisted his ankle pretty bad.

Tuesday we got to go to the departing missionary temple trip! I was so glad that president invited us. Its going to be my last temple trip in 2 years!! First time in the Salt Lake Temple and it was amazing. I think I understand why it took 40 years now haha. After the temple trip I went on exchanges with another greenie named Elder Canann. Both brand new and we had a full day of plans. Pretty crazy day.

Wednesday Elder Canann and I got a get a car from mission office to borrow because of Elder Lyons injury. It was super convenient because right when we got the car it started dumping snow. For dinner after we switched back from exchanges and Elder Lyons and I got to go to an early thanksgiving party which went pretty well. We got to talk to a bunch of RM's about their missions and stuff. That night we also had to drive all the way out to West Valley which is way outside the mission boundaries for a baptismal interview for a Swahili refugee. Driving on a Utah Highway in snow is pretty sketchy not gonna lie.

Thanksgiving morning Elder Lyons and I played in an awesome turkey bowl in the snow! We also had like 3 dinner appointments which was a little chaotic but it was some good food. I think I might've gained like 10 pounds but no shame. We also got permission to go see President Hillier and his family at the mission home down in cottonwood heights! Felt right at home there it was awesome.

Friday we spent contacting a ton. Highland Park Ward has some 90 perspective Elders so we just spent most of the day knocking that list out. Contacting is a whole lot easier with a car. Surprisingly a lot of people were opening their doors so we actually got to talk to people.

Saturday we spent time contacting some more and we got transfer info! As of right now Elder Lyons and I are going to be in a trio this upcoming week until I leave next Monday. We still don't know who will be the third but we find out tomorrow.

Sunday we went to like 5 wards. Paula didn't come to church again for some reason. We are still having lessons and she still keeps other commitments but she doesn't make it to church! I really hope I find out what happens in the future after I'm gone. Sunday evening we went to a really cool fireside at the Swahili branch. A Polynesian choir called Divine Heritage gave an awesome performance and the departing missionaries in our zone gave testimonies etc. I might not get to E-mail next Monday so I'll E-mail when I can. 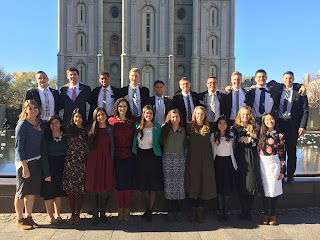 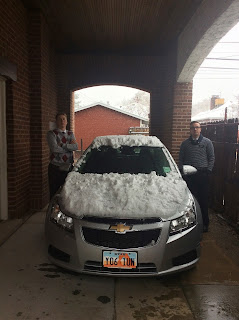 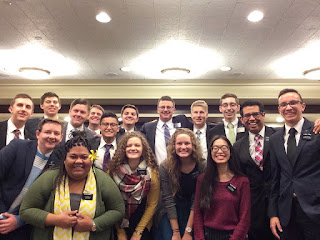 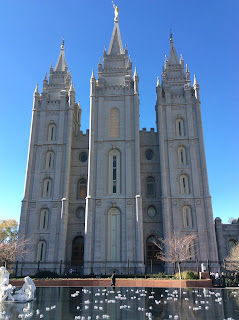 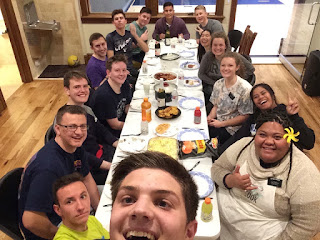 Another solid week that blew by! Last Monday evening elder Lyons and I
got to visit a recently returned mission president and his family. The
McConkie family! They are related to Bruce R. McConkie. They served in
the Czech Republic! It was cool to hear his experience as being a
mission president. Oh and it turns out Sister McConkie is Elder
Jenkins from the Tahitian district in my MTC zone's aunt! I feel like
the world around me is shrinking every week I am in Utah. haha

Tuesday our zone got to go to the refugee center for our service
project! We got to help organize donated supplies in a big warehouse
for refugees to come pick up. There are about sixty thousand refugees
in the salt lake valley alone it's pretty cool. We also had some great
correlation meetings with the ward missionaries and with our senior
missionary couple in the area. We have been recently told by the
missionary department that recent converts and investigators aren't
reading nearly enough of the Book of Mormon. Our goal is to really
refocus on the Book of Mormon now. To really explain it to people and
as missionaries spend a lot of time reading along with less actives,
investigators and recent converts. A lot of people don't like to read
the Book of Mormon because they don't understand it but we can't let
people use that excuse! As members we should all be doing everything
we can to help explain the Book of Mormon to others. Having faith in
Christ and having a desire to come back to church or being baptized
really comes down to knowing the Book of Mormon is true.

Wednesday we had a great lesson with Paula  our "on date" and cleared
up some misunderstandings. She felt like she needed to know everything
and to need to finish the Book of Mormon before her baptism! She had
been rushing through the Book of Mormon and not really understanding
much. I'm really glad we got to clear that up because it's a principle
that we will be able to better teach in the future.

Thursday was a long day. Weekly planning took forever and we didn't
get to do much. We did get to meet with a member who works for the DEA
though which was super cool. Pretty sure he told us some confidential
case stuff but his secret is safe with us. haha.

Friday we had interviews with president which went great! He told me I
get to go to the departing missionaries temple trip at the Salt Lake
Temple! Last one for 21 months! But whose counting...

Saturday we got to do a big service activity with the neighborhood.
Basically everyone who is home Saturday morning all get outside and
rake everyone's leaves! It was lots of fun and we got to meet a lot of
new people! Later we got to help a non member mix and pour concrete to
help him build a fence. He's neighbors with one of the bishops so we
are hoping he kinda opens up to the church. He doesn't seem too
interested but he is a really nice guy.

Sunday elder Lyons and I gave sacrament talks in Colonial Hills ward!
Turns out the entire stake presidency just happened to be there haha.
Unfortunately Paula was feeling sick so she couldn't make it to church
which means she's definitely off date to be baptized now. We are
hoping we can move it a week or two later to give her some time but
we'll see. Not that missionary work is a race by any means but I really
want to go to her baptism before I leave! Till next week!

This is one of the chapels in Highland Stake. Just thought it was
super cool and unique! The building is almost 100 years old and the
ward that meets there is having their centennial celebration on Dec 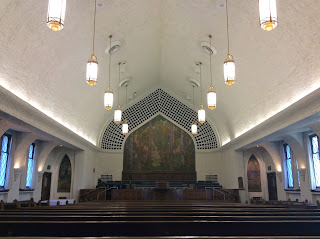 This last week went by so fast! I felt like last P-day was yesterday! Crazy how time flys. Last P-day our zone went on a beautiful hike in the mountains behind U of U. It was so pretty up there! Ill attach pictures at the bottom. After our hike we basically got locked up in the mission office all night because we are not allowed to proselyte on Halloween. All the missionaries in the valley came and we all got to watch The Other Side of Heaven. After the movie we had a devotional with Mitch Davis, the director and producer of the movie! Apparently he is best friends with president Hillier haha. It was so cool to hear about the making of the movie. The fact that the movie even exists is a miracle! It kinda got me thinking about New Caledonia again. I got word that my Visa came through. Not sure of exact departure date.

Tuesday I went on my first exchanges with Elder Larson. He is a super cool Elder with a great testimony. Apparently his Dad is like an executive of Post cereal so we all get unlimited cereal basically haha. He's the one holding up the ripped jeans in the picture. On the hike he managed to completely destroy his jeans. I couldn't stop laughing.

Wednesday Elder Lyons and I had another lesson with Paula. She is still progressing great! She is still on track to get baptized on the 19th. Oh and we also had some messed up brownies after a ward mission leader correlation. They had waaay too much vanilla and Elder Lyons almost puked haha.

Thursday I had to go on splits with another greenie. We both didn't know what we were doing exactly but it was a good experience. We stayed in Elder Lyons and I's area and I kinda felt like a trainer haha it was strange.

Friday we had a really powerful lesson with a recent convert that has kinda gone inactive. Ever since his father in law passed away he felt like God had robbed him. I think he only really joined the church because of his father in law but we are trying to build his own personal testimony. I've seen that quite a bit here. There are so many inactive members. Alot of these people never really had a testimony of the savior to begin with. We cannot rely on the testimonies of others nor can we have a testimony of the church as a whole. It just isn't good enough. We all need to develop a personal relationship with the Savior. This week a scripture in 2 Nephi 23:26 really hit me. It talks about why the scriptures even exist. So that we can learn of Christ. Studying the scriptures is so important. Really studying them. Reading for an understanding. Reading the scriptures is an absolute waste of time if we don't actually take the time to understand and learn from every single verse.

Saturday was kinda rough. Pretty much everything fell through except our dinner appointment haha. Elder Lyons always says that missionaries are happiest when they are teaching and that is the truth!

Sunday was my first fast Sunday in the field! I woke up with a terrible cold and not getting to eat. It was a rough morning but got better as the day went on. Fast Sundays are just hard. We have to work and ride our bikes all day and fast. Having a cold didn't help either but it all worked out. Till next week! 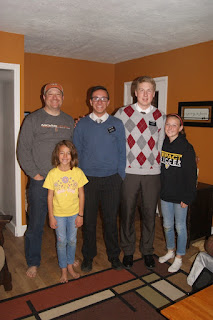 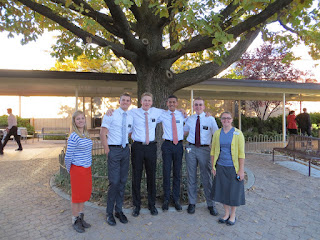 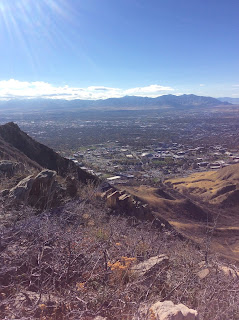 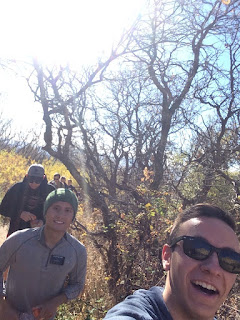 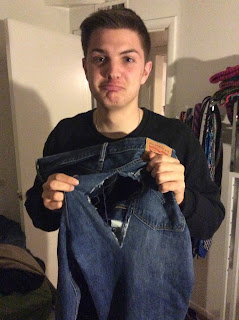