Another full week of proselyting! Lots of good progress in the area this week! We set 2 baptismal dates and worked a ton.

So we started the week last Tuesday without water cause our pipe broke! We didn't really get to shower for a couple days. Good thing we have deodorant!! haha. To start out... Jerry, one of our recent converts, came up to us at church and referred his sister to take the lessons haha. Even at 12 years old he's getting out and doing missionary work! Now his older sister and her friend are both taking the missionary lessons! We also followed up with one of our investigators named Johnathon. He straight up told us he was ready to change his life and he had stopped drinking and smoking. He's been holding all his engagements now and is ready to be baptized in the blink of an eye! Crazy miracle. We hadn't even taught him the word of wisdom yet and he felt the need to stop all these things!

Wednesday we were told by some other missionaries that an investigator that wants to be baptized had just moved into our area so we spent literally 3 hours just talking with everyone trying to find this dude and never did!!! At least we get to meet a lot of people though haha.

Thursday we saw a strong member couple but the wife isn't baptized yet! They still have to work through some marriage complications and to make things worse the husband's sister is trying to claim that their land is hers so they have to go to court. They might not even stay in our ward/area now :(. That's a big problem here in Vanuatu actually. Nobody really knows what land they live on cause the legal system here is so sketchy haha.

Friday was another day full of lessons :)

Saturday and Sunday were both pretty similar. Sunday was especially long. We went to church and stayed in the area till night time. We had some dry raman to get us through the day haha. Jerry also got the aaronic priesthood! He'll be passing the sacrament next week!

Bout it for this week!

Pics:
I keep forgetting to take pictures but here is a few of some cats cause they are literally everywhere. 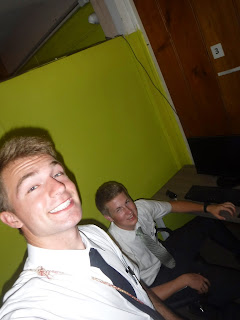 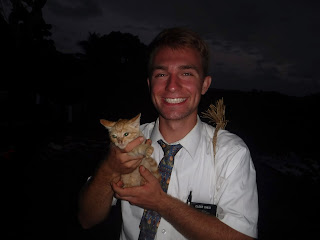 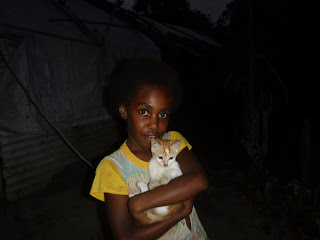 Finished up all the transfer movements this week! It was a little crazy. We got some new arrivers in on Wednesday who was off to New Cal but it turns out that church travel booked his flight to New Cal for 2019! He almost got arrested at the airport cause he has no Visa and no proof of leaving the country haha. We have to get him a flight on the spot to prove he was going to leave the country. The catch was that his flight was like 3 days later than all the others flying to New Cal cause their flight was full. Elder Lythall chilled with us and proselyted in Vanuatu for a few days! To make things worse his bags didn't even come so we had to improvise a bit and get him some clothes for a few days. Thankfully right before he left on Sunday his bags showed up at the airport thank goodness. Another thing that made things interesting was that 3 arrivers didn't even show up! They got held in the New Zealand MTC and no one told anyone in the mission! We had to cancel flights and such but nothing too crazy.

Another crazy thing. Wednesday morning at like 3:30am we had to take all the returning missionaries to the airport. First of all everyone in the house woke up late so we were all in a huge rush. To make things more interesting, when we got to the STL's house to pick up the one sister missionary returning to New Cal the gate to their complex was locked and turns out that they don't even have a key!! The poor sister had to throw her luggage over the 8 foot gate and change into shorts and climb over herself! A nice stressful morning to say the least :)

Thursday we just drove around new arrives to get all their business done. I also helped Elda Child learn how to drive stick :) that was fun. President wanted him to learn it well before we got the new bus (which we finally have now)!! It's basically the same, just not falling apart haha.

We got quite a few days to proselyte this week and it was super cool being in a trio. We had about 14 lessons and Elder Lythall kinda felt lost the whole time haha. He thought he would be learning French. Our 12 year old recent convert Jerry should be getting the priesthood soon too which is exciting!! The area is going well. Still teaching alot and got a good set of progressing investigators.

Have a good week everyone! 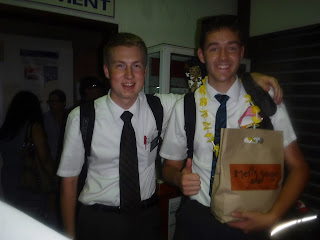 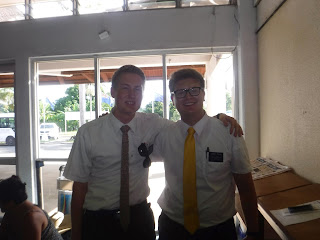 First time I've ever driven a brand new car off the lot!! 20km's 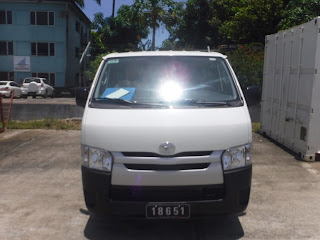 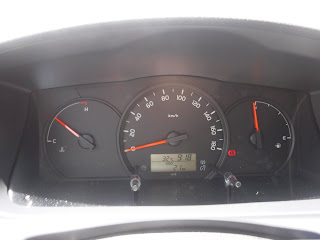