This whole week was a blur. Worked day in and day out and lost track of time.

Last P-day we taught a lesson to this guy named Jack who just came back as a seasonal worker in New Zealand. He is already a member but his spouse isn't yet so now they're going to get married in a couple weeks and she is going to get baptized!

Tuesday we worked with this 16 year old boy named Alex in Tanovoli. He hasn't come to church in a long time so we are trying to get him hyped about the gospel again so he cant start doing the sacrament every week. We are trying to work with all the Aaronic priesthood holder in general because the branch has very very few. I like working with kids our age because they are so much easier to relate to and then we get all the update dates on the world cup haha. Go Germany!

Wednesday we met this less active family who are actually half Wallisian. On Sunday we walked with one person from the family named Jenny. Everyone was going to come walk with us but they were all sick with the flu :(. We figure that since we cant take members in the truck that we'll just walk with them all to church haha.

Thursday, Friday and Saturday I also got the flu. I basically just popped Ibuprofen and trucked through it. I did my best to put a smile on my face haha.

The area is going well. Peter and his wife Anna are still progressing well. I think sometime next month they will be getting baptized. It's nice to be working hard and seeing the spirit working through us everyday!

Well last P-day wasn't much of a Pday at all. We just ran around doing errands and sorted some issues out. Probably one of the hardest P-days of the mission :)

Wednesday we got a third member to the companionship - Elder Mariteragi! One of my previous companions from New Caledonia haha. He was even Elder Hales' companion for a little bit too so we all kind of had a companionship reunion. He is getting transferred to Port Vila again and is just waiting for his flight. He'll be flying back tomorrow. Its been fun catching up on whats been happening. This is his last transfer on the mission! Crazy to think that he's going back to Tahiti in 4 weeks! Talking with him really makes me want to go to Tahiti now :)

Thursday we found this new investigator named Kal! He had tons of good questions about the priesthood. At first he thought that Paul never received the priesthood and that all we needed was the holy ghost to minister the ordinances of the gospel but it was really cool to see how he really came to an understanding that he did actually receive the priesthood! Not sure if hes super potential or not but we'll see. I also got to talk with Elder Hoose, the district leader on another island, Malekula for a good while. They all flew in for zone conference but we took them to the airport to fly back. Hes actually from New York and said he'd take me on a tour of Manhattan one day. I got a running list of places I need to visit now haha

Friday we taught a less active guy named Rolong who has huge potential to become a priesthood holder in the Tanovoli branch. We are arranging transport for him to come next week! Slowly but surely this branch is going to be at functioning capacity again! Nothing is going to stop the work of God from progressing!

Saturday we had another solid lesson with a new investigator named Grinsilla. She lives literally like 10 steps away from the church building in Tanovoli lol. She could get baptized in the next month I'd imagine but she is actually going to be going back to her tiny little island in northern Vanautu called Mota :(((((. She's not the only one though. There is this papa that lives close to the same place named Richard and he seems like he could progress really well too but hes going back to Mota as well :(((. C'est la vie.

Sunday we went to church in Jarilan. There were actually a ton more members there this week!!! About 70 I think which is waay up from before. Exciting to see. We also had Papa Peter with his wife come to church! They are by far our strongest investigators. Both parents are super glad to go to church so I think that the whole family could join the church! Really cool to see. He said he knows the rest of his family is going to persecute him for following "The Mormons" but he said he really believes its true.

That's all the highlights for this week! 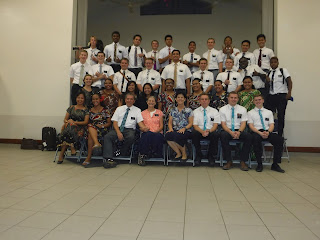 Twas a bit of a crazy and sad week.


Here are some highlights:

Last Monday we had an awesome family house night with some less actives in the Tanovoli branch. The less active guy came back to church on Sunday too! We talked about family unity and becoming Zion as a family. Twas good.

Tuesday we had to do a specialized zone training. Everyone on Santo came in and we talked about the power of "small and simple things." Small and simple means can either destroy or make our missions.

Wednesday we found a bunch of really cool members in this place called cross road. These people live right on the beach across from another smaller island called Tangoa. The island is so close you can talk to people on it from santo haha. Super cool. The beach is straight up black too which is even cooler! We are arranging for transport to pick them up to go to church cause they don't really have means of getting to church. Hopefully this upcoming week they can all come.

Thursday we were talking with another less active in Tanovoli named Jenny. She lives alone with her kids because her husband is gone as a "seasonal worker" in New Zealand. He picks fruit or something like that. There are actually a ton of Ni-vans who get hired on by companies abroad to do hard labor. We also found out that she has a "house girl" who lives with her who seems really interested to take the lessons so we are excited to teach her too.

Friday we literally drove all day long. We had to do some baptismal interviews in the bush in a place called Palon. We then had to pick up new incoming missionaries and drive them to another bush place called Fanafo. In total I probably drove our truck for like 7 plus hours. Somehow in the mist of all the transfers movements we found this lady named Julie who's husband gets back from New Zealand on Friday and they should be getting married right away so she can get baptized into the church! We just starting re-teaching the lessons to her because she feels ready to join the church after so many years.

Saturday I ate this fruit called corossol and it was probably one of the best tasting things Ive ever had haha. Its like eating a fruit salad cause it tastes like so many different fruits at the same time. We also went to a bunch of small little villages. The first being "usa" lol pronounced "usha" then we went to "Berol" then we went to "Rata" we met a bunch of random members and non-members. We are still trying to figure out who the Elders before taught in this area since this whitewash was kind of intense. Nobody had any notice that they were changing so it all got left opened ended.

Sunday we had 2 members of the district presidency at the tiny Tanovoli branch. The branch got a well needed boost I'd say. It was a solid church sesh. After church we went upto Jarilan to see how church up in that branch went too. Attendance was up a little. We also found this guy named Peter who is definitely our most solid investigator now. He said he's literally gone to every church he could go to to find the truth. We taught him about priesthood power and he totally understood! I'm super hyped to teach him again. Especially because he has distant family that are members which means there will be good member involvement to help him progress.

Monday we had our farewell zone conference with the Granger's! It was only one day and it was kinda rushed but it was good. Crazy to see the Granger's go because Ive spent my whole mission with them! Just a few hours ago when we dropped the AP's off at the airport will be the last time ill ever see them in person. It was a sad moment.

That's it for this week! Running out of time!

Pics:
Last Photo with the Granger's
Cows are always on the road 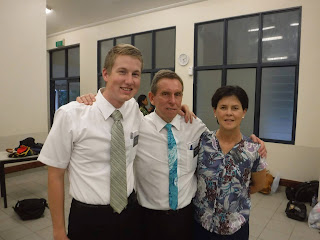 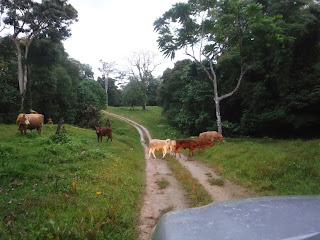 Well this week we spent mostly in Vila again. We flew to Vila early Tuesday morning and got to meet up with all the leaders around the mission! I got to see Elder Graf, Elder Secreten and my son Elder Champoux again which was super awesome!! We all learned a ton and I feel like president went all out because this is his last MLC he'll ever do! We learned lots about the importance of prayer and the importance of sincere repentance through small and simple things.

We flew back to Santo on Friday and then went straight to the area that we know nothing about. We drove an hour and a half out there and met with a bunch of random members. We then were told that there is a solid investigator in an outer village called Vilijo so we got our squad of kids to show us the way through the bush for like 30 minutes. We were literally crossing coconut plantations, rivers and climbing cliffs to get to this place and it turns our only this investigators father was there :(. We still taught him though with some other random dudes in the village.

Saturday we were busy taking missionaries around and doing some errands. I got to see Elder Nulak again. My long lost companion from New Cal haha. Later in the day we finally got out to one of the branches in our area called Tanovoli. The branch is really small like I've said before but the members are cool. There is this mama named Rose that we spoke with and we had a huge spiritual lesson with her. We talked about how powerful a simple a testimony can be. Mom I shared your experience of when you were talking to your bishop when you were young about how you knew that you were a child of God. It was a tender moment.

Sunday we went to church in the other branch "Jarilan" and spoke with a ton of less actives. Unfortunately the church has had some unfortunate difficulties here so as missionaries we really get to be involved in the administrative part of the church. We are literally helping the church grow and helping the members through growing pains. Up here in Santo it's a district so it's all under the direct of the mission president. We are really trying to get people to understand their responsibilities and callings. That's about it for this week! The white wash has been good. I feel like I'm always on my toes. 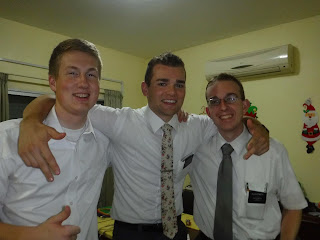 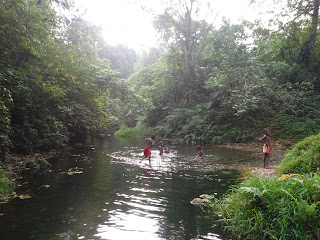 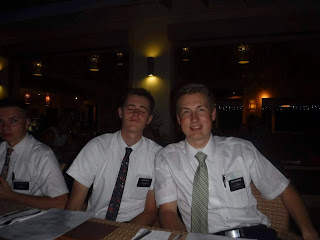 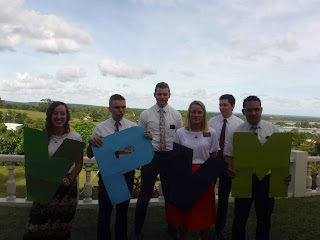