Turns out president needed me to switch islands so I'm on Santo now! Our house is huge and the area we just got whitewashed in is really far away. Takes about an hour and a half drive on an awful road up a mountain to this little village with a tiny Branch of the church called Jarilan. Not going to lie it is a really cool place but I'm hearing that the missionary work up there is pretty hard. Should be a good challenge! My new companion is named Elder Hales from Lehi. He has been out for about 8 months and has spent his whole mission so far on Santo. He's a good Elder.

I've only been in Santo for like 3 days but the highlight was definitely at church! We went to this branch called Tanovoli and it is TINY. Only about 15 members. We had church in a tiny tiny shack and it was a super tight knit group. Cool to see the church at its smallest extremities.

This week I've also been a little down cause I had to leave Blacksand so soon! I really got so close to those members and investigators in such a short time. I'm pretty sure Tino and Kawia were baptized last Saturday but Ill find our in a couple days because we are flying back to Efate for MLC. I had to leave on such short notice so I never got to say goodbye to anyone! :(((

This last week we also had another 2 exchanges. One where I went to Pango with Elder Dickes and one with Elder Eagar as the travel elder again haha. It took me to leave travel to realize how much I didn't like office work haha. Both exchanges were pretty solid. I saw a ton of less actives with Elder Dickes and basically just did travel stuff with Elder Eagar. We found a little time to get to the area and I got to see some of my Teouma buds again. Twas a good week! Happy to be out here serving a mission! 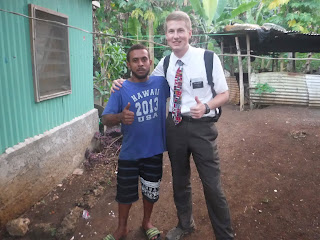 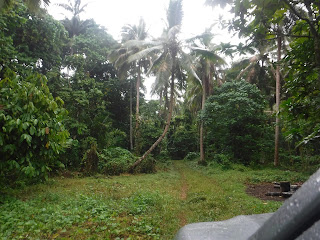 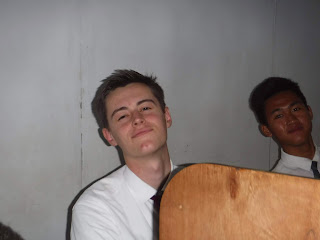 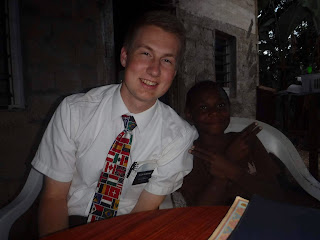 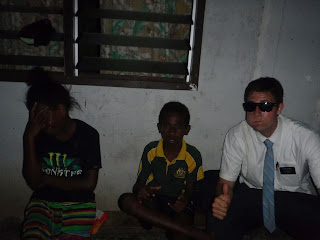 Back to Back Exchanges

This week was pretty loaded. We had two exchanges and 20 lessons. It felt over before it started haha.

First exchange was with Elder Johnson from Arizona! He just got out on the mish 4 weeks ago. Hes a stud. He surprisingly has no culture shock whatsoever. We spent the day just seeing a bunch of less actives and had another good lesson across the river with Mary and Steven.

Second exchange was with Elder Desir from Aruba! Also a solid exchange. Didn't have a whole lot planned but we were busy just about all day seeing more less actives.

Friday we were packed full with doing baptismal interviews from other district leaders. We went down to Pango and did one for a 14 year old girl then went to Etas and did one for this handicapped girl at the bottom of this cliff in the back of the bush. We were basically slipping our way down this cliff trying not to die to get to this investigators house haha.

Saturday we saw this less active teenager named Mike. Not going to lie he did not look happy to see us but after talking for a while it was all good. Had a good lesson on Ether 12:27. Later we had a family house night with this really cool family that just moved into our ward. The father is from Pentecost (famous for land diving) and his wife is from Fiji. She apparently remembers my HEFY group that went to fiji summer 2015 which is crazy. Their family is also hosting a few Muslim dudes from Bangladesh who work in Fiji. They were pretty chill. They made us some super good curry for dinner. The whole lesson was in English which was even weirder cause....English.

Sunday we walked our church squad down to the chapel again haha. We had 6 investigators come and 2 are getting baptized next week! Also another miracle: Papa Kamie's divorce papers are finally going to come through and they don't have to go to court! He should be getting baptized with his daughter Nana in about 2 weeks I reckon.

That's it for this week! It's good to be on the mish! Wouldn't want to be doing anything else right now!

Pics:
-Walking down the cliffs in Etas. Elder Johnson at the bottom, Elder Gunnel in the middle and Elder Hardy up close.
-Big tree that fell down but its still alive and grows lol. 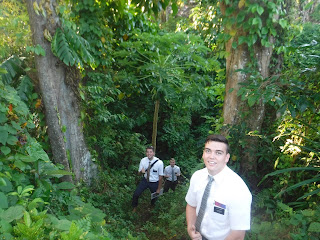 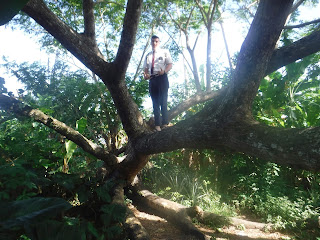 Had another solid week. Last P-day we had this awesome FHE with a massive family from Tanna. There were a ton of kids so it got a little disorganized and crazy but its hard not to love the kids haha. For the closing hymn Elder Hardy and I basically sung "As Zion's youth in latter days" by ourselves. Twas funny.

Tuesday I gave our districts training on revelation. I spent a good while studying the prophets talk on the subject. I really like the quote he used from D and C talking about how we as mortals cannot stop the flow of revelation that God wants to give to us. He compares it to a man putting his hand in the Missouri river. Anyway after we had to do something president calls "train the trainers". We just spent a little bit of time with the newbees and their trainers and talking about the expectations of the mission. It went well.

Wednesday we found 2 new investigators in the village on the other side of the river, Mary and Steven. They are pretty young but their parents want them to go to church with us so voila. We also saw Tino again who really perked up this lesson. He actually talked so that's some progress! He has a baptismal date for the 26th :).

Thursday we saw Kawia again and had a solid lesson with her. She seems on track to be baptized. Shes been coming to church but now we just have to get her Mom reactivated!!! Later we also had a meeting with the mission president and the state president on Efate. The meeting went really well I think. We were just discussing some of the needs of the mission and the state and how we can work together and what not.

Friday we did some baptismal interviews in this area right next to the beech called Pango. We interviewed 2 super cool little kids who seemed hyped to join the church. Cool to see such strong testimonies at such a young age. We also found out that one of our solid potential investigators just kinda fell off the map. We think shes avoiding us and she keeps making stupid excuses. She really liked taking the lessons I think but she doesn't want to let go her party life quite yet :(. Them Ni-vans and their partying...sigh.

Saturday we did another baptismal interview then went back across that river. We found two new investigators again named Natu and Juliet. They are both related to this inactive dude who loves talking to the missionaries named Thompson. We're hoping to get them all to church next week.

Sunday we had 5 investgators at church. We walked Mary and Steven with a mob of pikininis (kids) to church. We cant take people in the truck so we figured we'd just walked all the way with them haha. After church we saw Kawia again and got to know her family a lot better I think. Next lessons we're planning on giving her a baptismal date. She just learned how to pray and really loves coming to church. Cool to see! 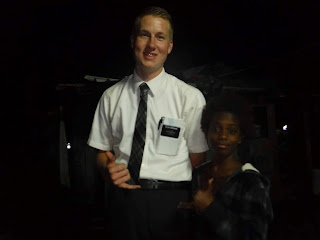 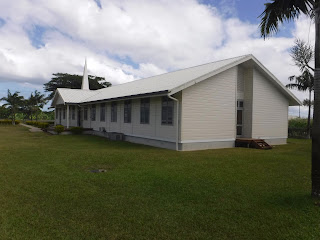 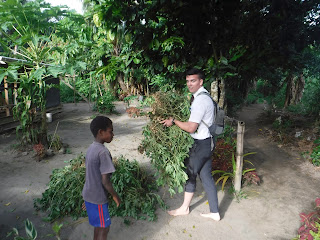 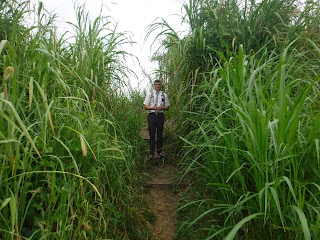 Last P-day I got to ride my first famous "port vila bus". Our truck was getting serviced so we had to take buses to get around. We also had an awesome family house night with the second counselor in our ward. Shared a few good verses in the Book of Mormon Ether 12:6-9 on faith.

Tuesday we went into another Tanna community and found this return sister missionary named Winnie. She showed us around the village and we started teaching this little 10 year old boy named Tino that they look after. They kinda took him in after he lost his parents and now he's been coming to church so he might get baptized this month!

Wednesday we went into the bush to a place called RangoRango. Some missionaries baptized a few people who lived up there but their baptismal records never got properly done, so we spent quite a bit of time trying to find them. Twas a really really pretty area. I didn't really take any pictures unfortunately.

Thursday we saw Marian again! We invited her to be baptized and she said she'd think about it. She did come to church for the first time this Sunday though which was awesome! We are kind of hoping she can get baptized this month.

Friday we went to yet another Tanna village behind the airport. The only way to get to most of the people was to cross a river. We rolled up the pants and went for it haha. It was actually super cool. We met this little 10 year old kid named Samuel and he showed us around the whole village. He even walked us all the way back to our house haha.

Saturday was solid. We started the day teaching that french speaking family and we did a little service project for them too. The papa has a date for the 26th so were working hard to have that happen. Later we met some members in blacksand. We are trying to work alot more with the members to get referrals. There is honestly no better way to do missionary work!

Sunday we had 4 investigators come to church! We also had quite a few solid lessons. We met this girl named Marie in our ward and she is getting ready to put in her mission papers so she said she'd help us work in blacksand.

Bout it for this week! Looking forward to mothers day calls next week! 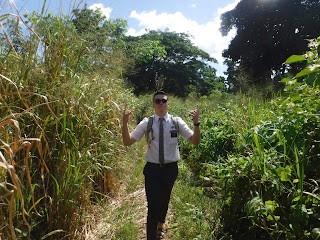 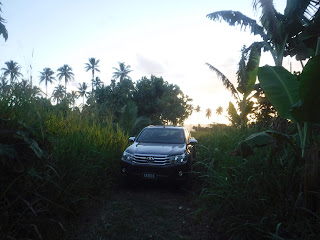