Another great week here in New Cal! Last Pday Elder Conger and I basically just stayed in for most of the day. I took a much needed nap and such. We also got to visit and nice less active family in the evening which went great. They like having the missionaries over but we were not sure why they don't come to church!

Thursday- we had lots of great lessons with some investigators. One of our investigators, Heirani,  recently got back from a long trip to Tahiti so we are starting to teach her again! She even came to church this last Sunday which is great to see!

Friday- a super nice lady who was visiting from Mont Dore was just casually studying the bible in a park and she called us over as we were walking by. She wanted us to help her understand the Bible and such. She kept saying how thankful she was for missionaries even though she was recently baptized Evangelical! She said she was really interested in the Book of Mormon and really liked some of the scripture in it!

Saturday- we went out with one of our ward missionaries which was a huge blessing. Our area is one of the biggest in Noumea and having a member with a car makes it super productive! We got to visit a ton of investigators and less actives. We even found a new investigator who was a referral!

Sunday- was good as always! We had 2 investigators come to church which was great! First time since I've been in Ducos!

Monday- we had a lesson with one of our new investigators named Michel and his wife. They have a big family and they're super nice! He recently got back from a catholic mission in North New Cal which was cool to hear about! Even though he's a practicing Catholic he's still super open to our discussions. We shared 3 Nephi 11 with him and his wife and they loved it! Also, when we were heading home for some reason we felt like we needed to stop by the market and buy a baguette! We needed to give out one more Book of Mormon to meet our goal for the day so we thought we came up short but when we were leaving the bakery there was a guy who we normally see at the market every time but this time he came up and talked to us! He was really curious what we believed and such and we gave him a Book of Mormon! Cool stuff! Till next week!

Pic: Huge cliff into the ocean 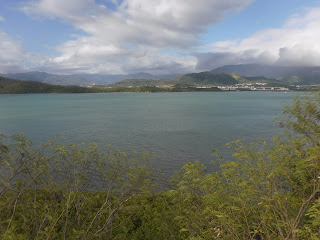 Its been a while! The mediatheque didnt give us a heads up like normal so we couldnt make other plans to email last pday :( Anyways these last two weeks have been pretty good! Two P-days ago Elder Conger and I got to head into downtown Noumea with Elder Tauotaha and Mariteragi who were on exchanges and we got to go shopping. I got a cool Kanaky sulu in the pics below.

We have also been finding lots of new investigators recently! Just in the last 2 weeks we have 3 new investigators who seem pretty promising! The work has been a little slow here in Ducos but its definitely looking up!

Back on the Thirteenth was Elder Congers birthday! For lunch we went out to this really nice sushi place which was crazy expensive but it tasted sooo good! I only got like 3 tiny roles because it was so expensive but it was worth it non the less. For dinner we made another whole chicken in the oven which was also super good.

Last Sunday was Elder Tauotaha's last day on his mission :(((( He flew back to Tahiti the next morning which was super sad. For transfers we got 2 new Elders in the district! Elder Claveau (from Tahiti) whose training a brand new Elder from Vanuatu, Elder Nulak. Elder Nulak doesnt speak a whole lot of French or English so he doesnt even have a way to communicate with his trainer which is crazy but hes a cool guy.

Last Friday we had a cool experience too. The whole day was just super slow and nobody answered all day long but right as we were going to head in we felt the need to just stop by some apartments to place a poster for an English class. We weren't really planning on it and it turns out the poster got ripped down super quick anyways but when we headed over to the apartments there was a guy who was just waiting in his car and as we walked by he got out and started asking a bunch of questions about the church and such and we gave him Book of Mormon and he seems interested! Cool experiences! 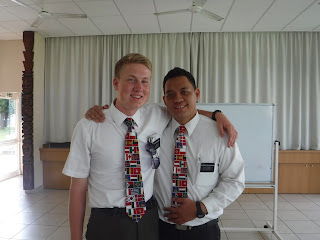 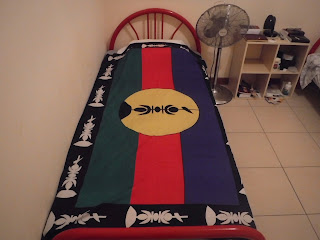 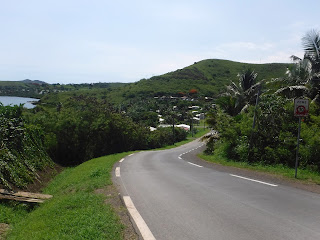 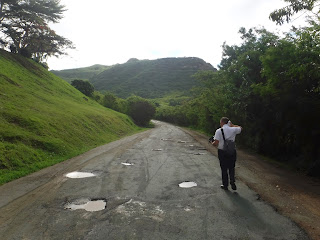 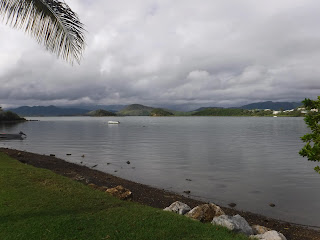 Pack of Dogs Following Us?

Another solid week with tons of crazy weather. Last P-day we had our first district activity which was a sports day at the chapel which was really fun. Lots of basketball football and ping pong etc and we all managed to get sun burned pretty bad.

Thursday I went downtown to get my "Carte de Sejour" which is just temporary residence papers similar to a visa. It was also insanely hot as well. The hottest day of the year I'm sure and it even rained a little so the humidity was also insane. We somehow managed to sweat more by not moving!

Friday we managed collect a pack of like 5 dogs who would not stop following us. They even followed us into a corner store and we had to explain to the owner the situation haha. To get rid of them we had to climb to the top floor of an apartment building, walk to the opposite side and take a different stairwell down out of sight of the dogs. It was ridiculous. Another crazy hot day as well.

Saturday we had a lesson with our only investigator on date for baptism named Laurant. He asked us tons and tons of questions and the lesson took like 90 minutes.

Sunday we got to go to this farewell dinner that some members in our ward put on for Elder Tauotaha who is in our district who is going home back to Tahiti this transfer! Its gonna be sad to see him go but the mission life goes on. It was probably the best food I've had since being here. Crazy good.

Monday it was pouring rain all day. When it rains here in New Cal the whole country seems to shut down. No one ever goes out side and no one wants to do anything which kinda makes it hard for us. Also two soaking wet white guys isn't the most appealing thing to let into your home I suppose haha. We even ran into one guy in this apartment building who stopped and talked to us for 45 minutes straight about how we were not following the holy ghost because we were proselyting in the rain. He liked what we were doing as missionaries but he told us to wait till the sun comes out again haha.

Tuesday we had a great district meeting. The last one with Elder Tauotaha ); Also two Elders from our district, Elder Gray and Ursenbach are leaving to Ouvea to teach for 4 days! Ouvea is one of the outer islands that only has an annex of church members. Whenever someone out there wants to get baptized president will fly a companionship out there to teach and baptize them. Crazy stuff. Till next week!

Pics: Views from the chapel right across the street from the regional airport; The casual burnt minivan that wasn't burnt like that 4 days ago and a van chopped in half. 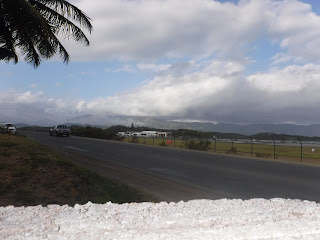 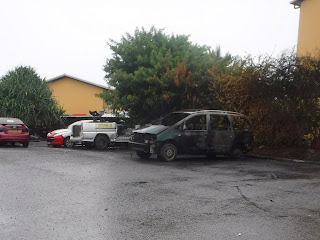 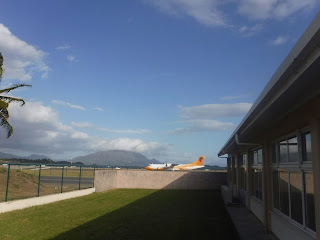 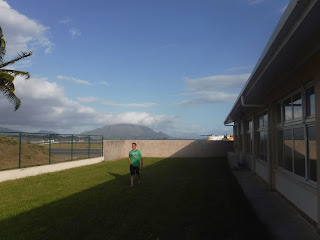 These last two weeks have been pretty great! Over Christmas both zones on New Cal met up and we had an awesome Christmas party with lots of sports and singing and such. For some reason they made every Canadian missionary get up and sing and I was dragged into it. Just 4 of us had to sing "As Sisters in Zion" in French haha. Missionary work over the holidays has been a little tough since a lot of people are drunk or not at home.... but we do our best! New Years Day Elder Conger and I had to stay in the apartment the whole time. For some reason this lady gave us 2 frozen chickens so we made one for our New Years dinner :). We also have many stories with drunk people on the streets. For example, this one guy told us that his shadow was satan and he kept trying to fight his shadow haha. Just this last Monday it turns out one of our "potential investigators" was actually a Jehovahs Witness so she went on and on trying to disprove things we believed in with scriptures that made no sense haha. Still trying to work on the French! I feel like I can understand people better now after being here for almost a month but the speaking side of things is still tough. Talk to you next week!

Found this locust the size of my hand! I'll hopefully get more pictures next week. 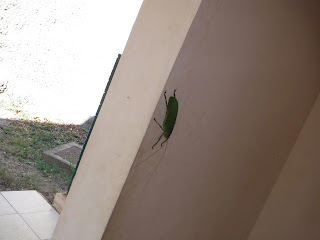 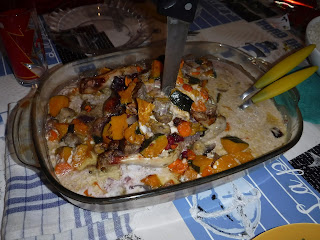