Monday was another casual P-day. The assistants bought us some milkshakes for all the work we've been doing for them. There is this American diner called Jills and the milkshakes are pretty good actually. Monday night we had a powerful lesson with Glen and his family. They basically all admitted that they need to put in a lot more effort into studying the gospel and to coming to church. I was super disappointed when they all didn't come to church after promising us like 3 times that they'd come. Tis the missionary life.

Tuesday we had like a 2 hour Q n A sesh. in a small little village with people from Tanna. They wouldn't stop asking questions about our church. I felt like we got our point across really well. The spirit was strong.

Wednesday we spent a while just trying to see a bunch of random investigators next to that same tanna village but nobody was home! We had a bunch of random kids following us around to try and find people but literally nobody was home. To subside our frustration one of the kids ran up a coconut tree and probably gave us one of the best coconuts I've ever tasted. Twas nice :). We also found a part member family while we were just exploring in the bush. Only 1 dude named Kal is a member and everyone else are non members. No one in the ward knew about them till now and they all would like to come to church.

Thursday we found another family from Tongoa. Started teaching them about the Book of Mormon but most of them cant read without glasses! Elder Child and I figured we could just buy some and give some to them.

Friday we saw Kal again with his Dad, James. James seems to be the only non member in the family that wants to learn more but hes solid!

Saturday we went to Elder Kennedys and Elder Gauldens baptism! We also invited a random lady from the flight agency to go to the baptism and she came!

Alright I'm running out of time already so I just wanna say that I'm happy to be on a mission! Ive been learning so much over these last 20ish months! This is definitely the hardest thing Ive ever done in my life but nothing could ever replace the experiences that I'm having. I know Jesus Christ leads us in this work and I'm happy to be the instrument in his hands! Have a great week everyone. 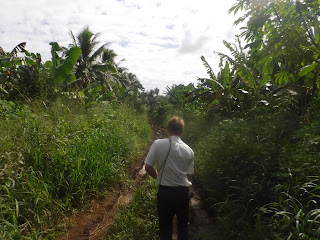