Not going to lie not a whole happened this week. Pday was strikingly normal.

Thursday/Friday I had an exchange with Elder Graf my MTC companion! Super super weird to find ourselves together again almost exactly a year later. We had a solid exchange. Had a lesson with a less active who's making his way back to church then we went downtown to talk with tourists haha. We wanted to try some contacting in English for a change and it was cool. We talked with this Kiwi couple for a long long time. We had nothing to give them in English but we told them to talk to missionaries when they got back to New Zealand haha.

Saturday we met with a younger member named Lucien who tries to come to church every week. He's a recent convert who's been preparing to go on a mission for a good year and a half now and we are just trying to motivate him to go.

Sunday-Tuesday was just the normal routine. There are honestly no real investigators in our area so its just been ineffective contacting and lessons with less actives.

Oh I have to mention Jeremy too! I think it was Thursday morning that we were just sitting in la place des cocotiers and he came right up to us asking about our religion! He's originally for the cook islands but now he lives with a french family here in New Cal! We taught him about the Book of Mormon and taught him to pray right then and there. I think it was one of his first times praying in his life! Cool miracles!

Pics:
The fountain at night! 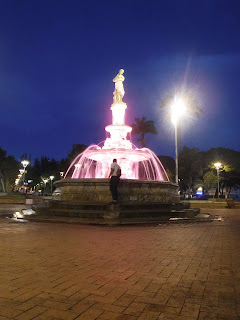 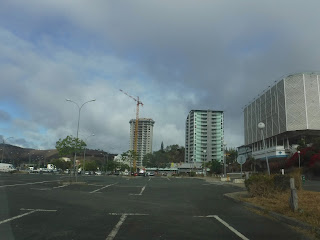